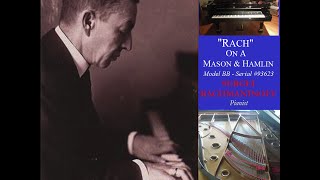 Sergei Rachmaninov is lauded the world over as one of the most popular composers of piano music. His works for solo piano and the famous concerti are staples of the concert hall and the greatest pianists. The demonic third concerto even had a movie mad about it, Shine, starring Australia's own Geoffrey Rush. What is not that well known, however, is that Rachmaninov had many ties to the Mason & Hamlin company. In 1909, Rachmaninov was preparing for his first tour of the United

Delivery day for a new Mason & Hamlin owner is always an unforgettable event. With no more than 250 people - worldwide - given the opportunity to purchase a Mason & Hamlin each year, a new member of the family is joining a very exclusive club. We always like to be on hand to share a glass of bubbles and ensure the occasion goes without a hitch. Every now and then, a particularly special arrival comes along. March saw one of these occasions when a stunning new model A was deli

With each passing year, more and more of Australia's elite music festivals are discovering the benefits of featuring the world's finest piano. Mason & Hamlin's rugged designs and build quality suit the relentless rehearsal and performance schedules that such events require. Producers can see that Mason & Hamlin pianos hold their tune and require less maintenance, while presenting the artist with a palette of colour and dynamics that is only limited by their imagination. In 20

Rare as they come - a pre-loved Mason